People that busy is often, but in the kind of person,

“I’m busy, profitable and not” you have quite some people say.

This is my mantra is, “not busy but profitable” I think that is not good most.

This time, we will talk a mantra on my work.

“It’s different,” but I think some people think, please capture the wind that there is also a kind of way of thinking (* ‘∀’) 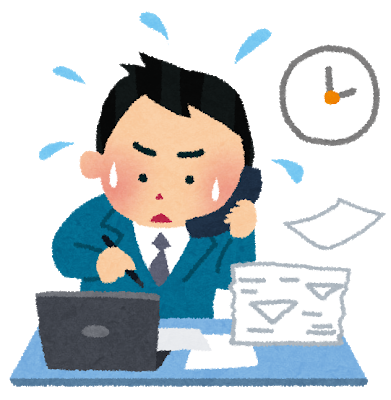 1. The reason “not busy but profitable” is not good

But why “not busy but profitable” is not good most,

– “not profitable in the spare time.”

You can recover When you become busy

– “I have profitable, busy very much.”

For now money is profitable. If Kere tight, you can save a job Once you have money to spare

– “not busy but profitable.”

The reason “not busy but profitable” is not good, because there is no simple recovery method.

At the same, that’s “not busy but profitable” situation, status quo than, when the situation of the economy and the work is poor, the deficit increases the risk of turned to.

2. Cause “not busy but profitable” occurs

· Busy happens when, prone to hands full by turning the work

When the work is busy, you than make a profit, they tend to be hands full by turning the work.

I myself, such as when there is an accident at work, there is also a time to give priority to be turning the job than profits.

However, in my case, the color so disgusting that there is no room you do Do not meaning, too much because we do not overfill the work, will not be rare in the context of “not busy but profitable”.

In people who are packed with work, further, it is such people who are not able to streamline the work,
are prone to a situation of “not busy but profitable”.

• When opening, off-season, with such price competition, had a price destruction

I, from thinking independently as a sole proprietor, but became independent two years later (does not mean that it is good), I think that many people to be independent in momentum.

If you have independent momentum, first to excessively low pricing in order to take a job, even when busy because of the first of the pricing, it may become “not busy but profitable” situation.

Other, and the off-season, will be the price cuts than necessary in price competition with other suppliers, “not profitable but busy” does not return the pricing even when busy sometimes fall into the situation.

It is easy to the price cuts, but it is hard to price increases.

Off-season and, when that happened is price competition with other suppliers, is whether the price cuts, let’s from thinking well.

· Profitable not have a business

When I was a job that is not profitable fundamentally, busy even if much money but does not.

I have had before a troupe of characters show show (such as Hero show), was out of business without ride to orbit.

However, character show itself is in the weekend or holidays such as holiday day, on not to do rarely on weekdays, because the profit margins are low, I think that it was not in much money as had been tentatively on track .

Very busy, I think it was about to live somehow.

I not a sour grapes (laughs)

In other work, when I was a job that is not profitable fundamentally, it can live somehow busy.

I think that it is an amount that can not be Once not as busy life.

And expense is too much

The quite often, you have to work at a reference of when the Himself began its work, also seen if the cost is too much.

In my case, I started Agekasanegyo is is about 22 years ago, of course, has become so 22 years ago than those of the now several stages convenient, there is no need now the old days was necessary expenses the thing is there are many.

In particular, fixed expenses (rent an office, employees and fixed salary, such as hiring a clerk) would be better to carefully decided.
If the fixed costs are too much, when the work becomes upset, there is a risk that tends to be in deficit.

3. In order not to “not busy but profitable” is?

The only pre-opening possible, so as not to “not busy but profitable” conditions, including the pricing and expenses, it is recommended that you keep the simulation of the profits.

From the opening, or changing the pricing and conditions, but it is possible to increase or decrease of the expenses, who requires less as far as possible changes, I think that the work after which opened go smoothly.

· Profitable not not issue a hand to work

Simple, also not out of the hand to the work that does not profitable, I think that it is important in order to not become a “busy but not profitable” situation.

If you want to like work because I not profitable,
I think it is, it’s freedom of the person!

Of and expenses review

And expenses for the suspension, by calculating the benefits due of the cost, you need its expenses, unnecessary or, review I think it is important.

Of course, resulting in a reduction to the really necessary expenses, contrary to or efficiency of work is worse, because it is also possible to or lower profits than reduce the cost, also pay attention so as not to reduce to expenses necessary necessary is.

4. If you still can not escape from the “busy but not profitable” situation?

If I, should continue its work, I think to think or not to withdraw.

Definitions for the work I think people that it is, respectively, but basically a profit, I think that most of the objectives is possible to obtain an income.

But is not it “discussion for discussion”, be careful so as not to become a “work for work”, it is important to be aware of so as not to fall into the “not busy but profitable” situation I think
(* ^ ▽ ^ *)

Prerequisite knowledge* IT is a generic term for PC and Internet tec...

This time,"Do you do whatever you want? Do you do work for money?"I wi...