This time,“Do you do whatever you want? Do you do work for money?”I will tell you the story.

Of course, I think that the best thing is to do what you like, and that it becomes money.

However, if that is difficult, I would like to express my opinion on what choice to make. 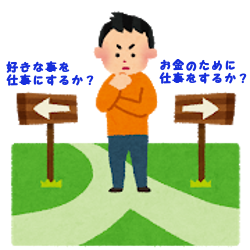 1. I tried to make my work (Grecais’ s career), my favorite things, but I could not eat it, the job for money became my main job!

After discontinuing the character show company, I started wrestling practice at the age of 34, made a debut at the age of 35, and had played to some extent until about 40 years old.

Wrestling itself was a late debut, so I did not think about doing it on a special occasion, so the loading shop (lifting industry) was doing in parallel.

After independence at a loading shop (lifting company) at the age of 40, the wrestling game is a spot appearance.

I do both my favorite work and my job for money!

· It’s fun and challenging because you do whatever you want

I think that the merit of No. 1 that I like to do my job is that it is a fun place and a challenging place as I do something I like.

· There are many cases where you can meet friendly people

I also have a lot of relationships with friends of the character show era and friends related to professional wrestling in private.

· Working time goes by, but it does not feel long

When I do a job I do not like, I think that it is very time consuming.

I wonder if it will end soon …

I think that there is something I think, but I do not think that it will take a long time to feel like doing any work I like.

3. Disadvantage of making things work as a job

· Works that are made up of people who like it, money tends to be cheaper

I think that the work that is made up of people who like it is likely to make money cheaper.

The reason is that many people say “money can be cheap because I like it”, the market will definitely go cheap.

In the character show I was doing earlier, there was a place like taboo to negotiate money.

Although the character show has a lot of distant work, I did not get distant fees etc (I do not know now), it was not like the situation to charge a distant fee.

By the way, at the loading store I’m doing now (lifting industry), of course I am taking a long distance fee.

Still it is more profitable to go around the site in the near field than to go to a remote work, so I try to refuse my distance work as much as possible.

It is also a character show that I was doing earlier, it is also a loading shop (lifting industry) that I am doing now.

In my case, even though the loading shop (lifting industry) is told to do somewhat strange way of work (eg, extremely poor setup)、

4. Benefits of doing work for money

Basically it’s a job done for money (for living) </ span>, unless it is a dangerous way, you can divide it as “well, okay?”

However, I do feel like being stressful when I am strangely requested from here if I like it.

Even during the character show, there was a strange show composition from the client side and I was requested to produce, but I felt a lot of stress.

My experience is that the purpose job is to earn money, the money market is more likely to be higher than the work that is made up of people who do whatever he likes and money negotiation is also easy.

· Even if you do not understand somewhat, you can do it with “Well OK”

As I mentioned earlier,I feel pain when I make an unconvincing request as I like itTo the contrary, the work we are doing for the money is somewhat unconvincing, “whatever」There are many things to do.

Speaking of casualness is easy.

Although there is a story a little, there is a proverb saying “You can be a good one whom you like”, but my opinion is that it is not limited as far as work is concerned.

Of course, I think that anyone who likes doing it improves improving anything, but people who work for money are more likely to work than people who do whatever they like about work .

6. The final judgment is balance

“Do you like what you like? Do you work for money? “The final judgment of, I think whether to judge to some extent considering the balance.

In my case, the Character Show showcase company did not go well and quit, but I think that it was good to quit when I think about it from now.

The reason was that I liked the character show group company, but it was quite a bad job as a job.

I myself do not want to do a bad job, so I have not continued the character show theater company until I put up with bad things, I think that it was good as a result. 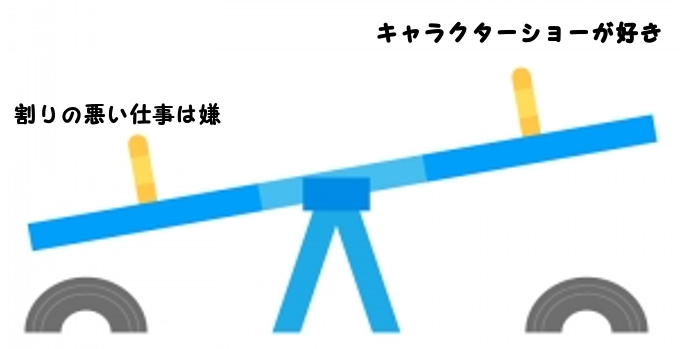 I will put up with some stress! 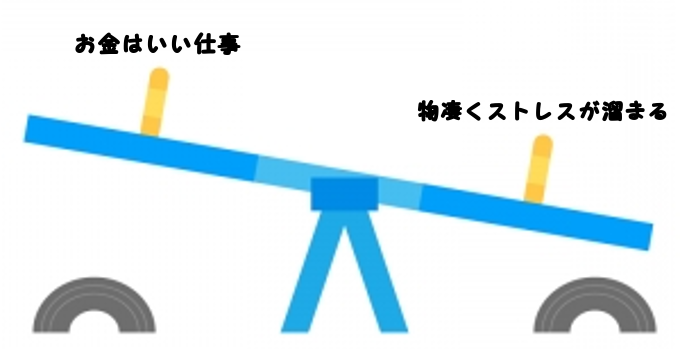 </Criteria for judging whether to do the workstrong>

When you make things your favorite things

When doing work for money

To the income amount, considering the burden of the body, stress, restraint time, future things,

Still a work to do? Is it a job you should not do?

Considering the above points, I think whether to be judged.

7. I do not recommend work that can only be done when I am young, even in my favorite job

If you are doing your favorite work until 35 years old, then do normal work.

“I do my favorite job when I am young, I work normally when I reach a certain age”

It is harder than I imagined.

Just like a professional baseball player, work that earns more than a lifetime annual income of ordinary people alone is different, except for some of those jobs,Even in my favorite work, I do not personally recommend work that I can do only when I am young.

Of course it will be myself to do what you like, work for money, or make a final decision.

If I get lost, I think whether it is the final judgment after trying objectively thinking what to think if this is another person’s affairs, asking people’s opinion, etc.
(* ^ ▽ ^ *)

People that busy is often, but in the kind of person, "I'm busy, pr...

Prerequisite knowledge* IT is a generic term for PC and Internet tec...